The Paris Le Bourget Air Show is the venue for announcing news in the sky. Manufacturers are striving to attract potential customers with new and new models that better meet the criteria of airlines. Sometimes this is revolutionary news – for example, the announcement of the new Boeing 787 in 2003. The introduced Dreamliner for its time exceeded the established standards and brought significant innovations in the form of significant use of composite materials.
The other are “only” evolutionary news. For example, this year announced the model Airbus A321XLR. Based on the A321LR, it adds technology news to the Airbus A320Neo family. This created a single-seat aircraft with the longest range in its category. Taking into account the cost of developing the new aircraft, it is understandable that Boeing and Airbus have rely on a modular design. Boeing 737 or A320 family aircraft allow efficient use of components. This procedure is not black and white. Grounded MAXs are a clear example of this. Efforts to reuse components respectively modular aircraft construction resulted in problems. On the other hand, the new engines, which increased efficiency, led to changes in the functional flight characteristics of the aircraft. We already know the impact of these changes.
But let’s look back at the Airbus A321XLR. The main change from the A321LR is an increase in range by 15% to 4.700 miles, which is 8.700km. Increase range was possible thanks to a permanent tank located in the central fuselage (Rear Center Tank – RCT). The RCT allows aircraft to hold more fuel than the modular tanks used so far (Additional Center Tanks – ACT). The increase in tank capacity resulted in an MTOW of up to 101 tonnes. This entailed the need to modify the central chassis. But even the new chassis was not an obstacle and so we have a “new” Airbus.
This means that it is possible to fly nonstop from London to Miami, from Tokyo to Sydney or from Rome to New York. Until now, these flights have been the domain of wide-haul and large-capacity aircraft, which are mostly in the fleet of classic airlines. It is the A321XLR that opens the door for low-cost airlines to attack long-haul flights with their cheap tickets. The question is, of course, what comfort aboard passengers will experience. Low-cost gaps between the seats, smaller storage compartments overhead, fewer toilets, and possibly weight limitations, will be offset by a lower ticket price. Of course, it is up to each passenger to choose which option to use. 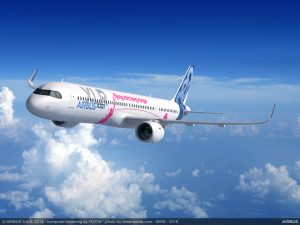 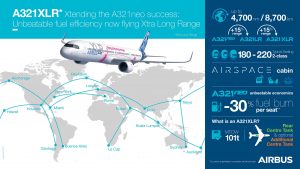