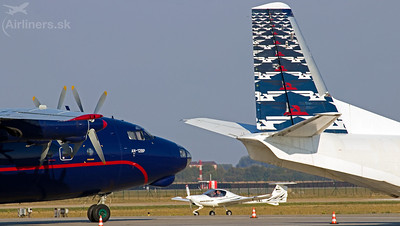 Intrusion [Noun, -]: An occasion when someone goes into a place or situation where they are not wanted or expected to be

Hello dear friends,
Have you ever felt that awkward moment when somebody is trying to make you understand that you have overstayed your welcome? Well, it is something that can be quite touchy to handle in the everyday life, but I am sure that most of us who have already experienced it understood fairly quickly what the easiest solution to that. Leave.
But then what happens if you are somewhere and nobody is able to make you understand that your presence is not ideal at that time and place?
Well, let us find out!
It is an early autumn day at a regional airport, and the weather may not be perfect, but it is very flyable. Traffic is relatively quiet, and the tower is handling a few general aviation flights, as usual. A couple of commercial arrivals are scheduled in half an hour, but then again, nothing too complicated.
Quite rightly, one could assume that this is a perfect moment to send a student on a first solo navigation, and that is exactly the decision that is at hand in one of the local flying schools. The student is in good condition, all the training is going rather smoothly, so the flight instructor calls the tower by phone to announce the flight, advise the controllers that it will be a solo student flight, and then finally send his trainee to the aircraft.
The main objective of the exercise is to leave the control zone to the South-East, fly more or less along the CTR boundary on to a small uncontrolled airfield, continue to the North, and return to the departure aerodrome through the northern point of entry to the CTR.
Of course, it’s not the first time the student pilot does it. It has been repeated may times, prepared meticulously and validated by the flight instructor. No worries there. The flight preparation is good, the skills of the student are healthy. No reason not to go along with the flight.
So, the departure is relatively uneventful, and the light aircraft sets off into the late afternoon sky. All indicators are in the green, and the trainee quickly reaches the exit point. As it has been done in the past, the student then contacts the regional Flight Information Centre just to make sure that somebody is there in case help becomes necessary.
Unfortunately, one thing goes wrong. Out of habit, the student reduces the volume to essentially zero and begins to navigate.
Second problem, instead of proceeding on a north-easterly heading, the aircraft is carried away a little more to the North, possibly by stronger winds than expected, and within seconds, re-enters controlled airspace. Without clearance, of course. The pilot has no idea what is happening so far.
The bigger issue for the tower controller, who has seen the infringement is that the light aircraft is heading straight for the axis of the active runway. Should the course stay the same, it will cross the approach path at about 5 miles from the runway threshold, at 2000 feet. Repeated call-outs to the light aircraft are useless, either directly or through Flight Information Center.
And, at the same time, we have an Airbus A320 intercepting the ILS a few miles to the East, maintaining 3000 feet, and a 737 following 6 miles behind also for an ILS approach. Yes, at the moment they are separated by 1000 feet, but when the Airbus will hit the glideslope, that beautiful story will change. Cornered into the tricky situation, the controller issues a go-around instruction, instructs the airliner to maintain 3000 feet, and turns them away, while issuing new headings to the second traffic, to resequence them.
So, let us take a quick look: the light aircraft is now leaving controlled airspace to the North, the two commercial airplanes are being guided for a new approach and the good news is that there were no losses of separation involved.
As if nothing happened, the student pilot makes contact with the tower to ask for landing instructions, and finishes the flight as uneventfully as it had started.

What happened?
Well, we can all realize easily what happened here. Of course, this seems like an advertising for maintaining two-way radio contact with the ground at all times. And even more so when you are or suspect that you may be close to controlled airspace, or to a controlled airport! There are several options, you can stay in contact with the controller in charge of that airspace/airport, even if you are outside of their area of jurisdiction, or also with a flight information centre, who will be able to advise you or relay messages from his colleagues from the tower or approach.
But what I would like to stress today is targeted at flight instructors. It is completely understandable that during flight training when flying outside controlled airspace, it is much easier not to establish contact with flight information, to have more time and be able to focus on your student. But if I could ask you for a big, big favour, it would be to build within your students a healthy culture of contacting FIC whenever they can, and using that service appropriately. It is helpful for everybody; it may keep them out of trouble and even save their lives in some extreme cases. And it will facilitate the work of many other pilots and controllers.
Maybe try to think of it this way: if we help controllers to avoid unnecessary workload, their service to all pilots (including yourself!) will be much more efficient.
Now, I would also like to add a short word for the controllers. What you read here is a situation that may happen to just anybody. And I would like to point out one specific detail out of this mishap. After the infringement happened, since nothing could be done about it, the controller did not mention it to the student pilot at all. After landing he contacted the flight instructor over the phone to invite him and his student to have a good conversation about it. Bearing in mind that it was a solo trainee, adding to the pilot’s stress was clearly not the thing to do. And may I also suggest that admonishing pilots is certainly not an ideal way of achieving better safety in your airspace.
Thank you for reading, and see you shortly! Next week, we will look a little more into flight information services and how much they can be helpful.