Conundrum [n, -s]: A confusing and difficult problem or question.

Hello, dear reader. This article was brought to you by AVIAtest BE/LAB-011 and Airliners.sk, o.z..

I would like to talk to you about a very particular problem today. One of the sentences that is most often heard in flight decks (one day, I solemnly promise I’ll find out and explain where the word “cockpit” comes from, far from poultry or other considerations):

“What the hell did he mean by that?” – and that would be without using the push-to-talk.

We You have all been there, I suppose. You are taxiing at an appropriate speed (before departure: less than 15 knots GS – after landing: flash-what-the-hell-let’s-call-it-a-day knots GS) with an A5 chart on your knees that has the consistency of a “Value” single-sheet napkin from a fast-food restaurant, and probably with a big smudge of engine oil on the taxiway where you are.

The flood light inside your aircraft hardly floods anything, but you can see the shadow of your own head magnificently clearly on the chart. 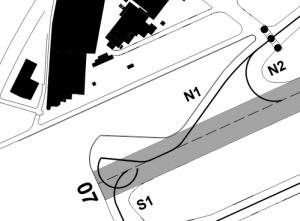 The pilot has been instructed to taxi to the holding point of RWY 07, and did a correct read-back. After the holding point, the taxiway splits into N1 that allows a backtrack and full-length departure and N2, which makes a 150°-turn onto the runway for a faster move.

Upon approaching the holding point (the quadruple yellow line painted on the ground), the pilot sees a sign saying “N”. The aircraft is really heavy tonight, and a full-length departure is really necessary.

Pilot: “Huuuuuh… Tower, can you confirm that we can go to holding point November 1?”

And that is where, in spite of their colleague hurling down final approach, both pilots happily continue taxi past the holding point.

Controller: ”I confirm, hold short of runway 07, company 737 on final”

Pilot: ”Affirm sir, we have the traffic in sight”

Do you see it coming? Hold on to your hats…

Controller: ”Do you confirm you are on the runway now?”

Controller (to the aircraft on final): “Go around, I say again go around, traffic on the runway” 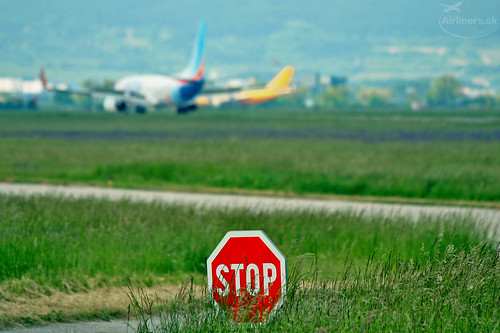 And that, my friends, is a splendid, state-of-the-art runway incursion: “Any occurrence at an aerodrome involving the incorrect presence of an aircraft, vehicle or person on the protected area of a surface designated for the landing and take-off of aircraft.” (ICAO Doc 4444 – PANS-ATM)

Now, let’s go back to our story and see what happened:

The airport signage can be considered ambiguous. The pilot was genuinely convinced there was a second holding point further for the intersection that he wanted, so he continued taxiing until seeing it, disregarding the proximity of the runway;

The controller was ambiguous in his response to the pilot’s request to continue to N1. Yes, they could continue taxi, and No, they had to hold short. In doubt, the pilot should have asked for clarification. But then again, there was no doubt in his mind. One could possibly wonder if the controller was aware of the position/intentions of the taxiing aircraft, and also about the questionable signage;

The pilot did not interpret the chart correctly: holding points are depicted on aerodrome charts, and it should have been clear that by crossing the painted lines, he was de facto entering the runway where someone else had been cleared to land.

Fortunately, the controller regained situational awareness quickly and was able to keep control of the situation by issuing avoidance instructions, thereby averting a more serious incident, BUT we can learn from that:

Ok. So, until next week, my friends. Fly safe and speak well.

This website uses cookies to improve your experience while you navigate through the website. Out of these, the cookies that are categorized as necessary are stored on your browser as they are essential for the working of basic functionalities of the website. We also use third-party cookies that help us analyze and understand how you use this website. These cookies will be stored in your browser only with your consent. You also have the option to opt-out of these cookies. But opting out of some of these cookies may affect your browsing experience.
Necessary Vždy zapnuté
Necessary cookies are absolutely essential for the website to function properly. This category only includes cookies that ensures basic functionalities and security features of the website. These cookies do not store any personal information.
Functional
Functional cookies help to perform certain functionalities like sharing the content of the website on social media platforms, collect feedbacks, and other third-party features.
Performance
Performance cookies are used to understand and analyze the key performance indexes of the website which helps in delivering a better user experience for the visitors.
Analytics
Analytical cookies are used to understand how visitors interact with the website. These cookies help provide information on metrics the number of visitors, bounce rate, traffic source, etc.
Advertisement
Advertisement cookies are used to provide visitors with relevant ads and marketing campaigns. These cookies track visitors across websites and collect information to provide customized ads.
Others
Other uncategorized cookies are those that are being analyzed and have not been classified into a category as yet.
ULOŽIŤ A PRIJAŤ
Powered by